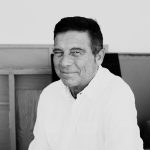 Architect, Emeritus Head Professor of Design in the Madrid School of Architecture, ETSAM (Spain)/ Chief Architect of Alberto Campo Baeza Architects / Also techer at the ETH in Zurich and the EPFL in Lausanne as well as the University of Pennsylvania in Philadelphia, the Kansas State University, the CUA University in Washington, and L’Ecole d’Architecture in Tournai, Belgique. More recently, he has been named Clarkson Chair in Architecture by the Buffalo University. / His works have been widely recognized. He has won the 2021 Spanish National Prize for Architecture,  the Heinrich Tessenow Gold Medal, the Arnold W. Brunner Memorial Prize of the American Academy of Arts and Letters, and the International Award Architecture in Stone in Verona, among others. / He has exhibited his work in the Crown Hall by Mies at Chicago’s IIT and at the Palladio Basilica in Vicenza. And in the Urban Center In New York. And at the Saint Irene Church in Istanbul, and the Tempietto of San Pietro in Montorio, Rome. In 2009 the prestigious MA Gallery of Toto in Tokyo made an anthological exhibition of his work. / He is a prolific writer as well, with some of his texts having been translated into several languages.

Submission Form
Registration
Manage Cookie Consent
To provide the best experiences, we use technologies like cookies to store and/or access device information. Consenting to these technologies will allow us to process data such as browsing behavior or unique IDs on this site. Not consenting or withdrawing consent, may adversely affect certain features and functions.
Manage options Manage services Manage vendors Read more about these purposes
View preferences
{title} {title} {title}